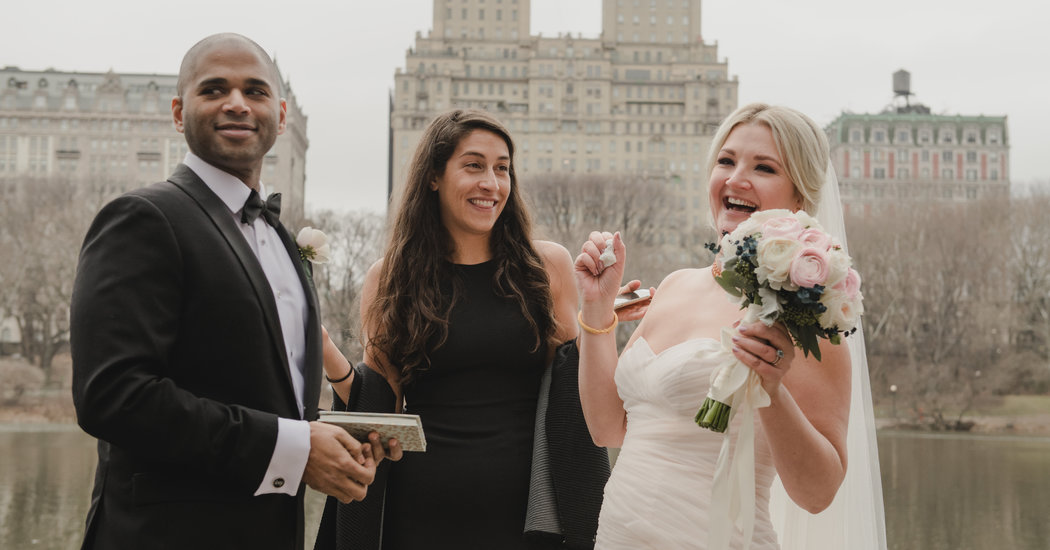 A few weeks after Fariaz Rabbani proposed to Allison Tyndall, he took her to a bank in Queens, where he opened a safe deposit box filled with jewelry once worn by his mother.

His mother, Fatema Rabbani, is alive and well in her native Bangladesh, as is his father, Golam Rabbani. They live in Barisal, one of the oldest municipalities and river ports in the country.

“I call them once a month just to say hello,” said Dr. Tyndall, 39, an English teacher at Regis High School in Manhattan. “They are such beautiful people.”

Despite her affection for Mr. Rabbani’s parents, Dr. Tyndall has never met them in person, and Mr. Rabbani, their only child, has not been in their company since February 2013, when they retired and left their Sunnyside, Queens neighborhood to return to Bangladesh.

Their departure left Mr. Rabbani alone in an uncertain world of so-called dreamers, the hundreds of thousands of undocumented immigrants who arrived in the United States as children, and who had hoped to gain a pathway to permanent legal status through the Dream Act, a 2001 bill that never passed in Congress. (In 2012, dreamers received temporary protection from deportation through an Obama-era program, the Deferred Action for Childhood Arrivals, or DACA, which the Trump Administration rescinded in 2017. (Litigation ensued, and the cancellation of the program was put on hold until the Supreme Court makes a decision on the matter, which is expected sometime this year.)

“It frustrates me,” said Mr. Rabbani, a New York-based actor and stand-up comedian who added, “At times I feel stuck, trapped and depressed.”

Mr. Rabbani, who was 8 years old when his mother took him to the United States — his father had already arrived in Queens — is not allowed to travel outside of the United States, nor can his parents make a return visit to see him, as they are also stymied by stringent immigration laws.

“I’ve gotten used to the idea of not being able to leave the country,” said Mr. Rabbani, who graduated from Queens College with a psychology degree in 2006. “The travel thing was more difficult to handle when I was younger and wanted to see Europe, or go home to see my family.”

“Both of my grandmothers died in Bangladesh, and I couldn’t be there because I couldn’t leave here,” he said, his voice cracking. “Those were very difficult days.”

The ensuing days have been no less difficult for Mr. Rabbani and his parents. Reached at her home in Bangladesh recently, the groom’s mother sobbed when told that on her son’s wedding day, a pair of her earrings, made of rubies and gold, would be worn by Dr. Tyndall.

“I miss my son, and I wish I could meet Allison,” she said through her tears. “I hope that one day we can all be together.”

For Mr. Rabbani, who still lives in the same Sunnyside apartment he once shared with his parents, life has been considerably brighter since he met Dr. Tyndall in August 2015 through OkCupid.

“She was beautiful, and I could tell right away that she was really intelligent,” he said. “I couldn’t wait to meet her in person.”

Dr. Tyndall, the only daughter of William Tyndall of Girard, Ohio, graduated from the University of Toledo in 2002 with a journalism degree and received a master’s degree in English from DePaul University. She also has a Ph.D. in English literature from Stony Brook University.

“When I first saw Fariaz, I thought he was really cute, but he was a comedian, and I thought comedians were egotistic, so I clicked off his profile,” she said. “But then I thought, ‘I’m a better person than this, I should be more open,’ so I clicked back on him.”

She introduced herself online and “he responded with a couple of cursory questions that I answered and that he ignored,” she said, laughing. “Then he asked if I wanted to go out for a drink.”

She said yes, and they arranged for a first date at a Manhattan bar.

“He was quick and witty and really charming and flirtatious, and maybe a bit too forward,” said Dr. Tyndall, who was then an instructor of English at Stonybrook University. “He was also very smart, and appeared emotionally well-adjusted.”

Dr. Tyndall told Mr. Rabbani that her father was mulling retirement as a letter carrier in Youngstown, Ohio and that her stepmother, Barbara Tyndall, who has three children of her own, was about to retire as a special-education teacher in Trumbull County, Ohio.

Mr. Rabbani, who appeared recently in a short play, “Lost Boys,” at the Hudson Guild Theater in Manhattan, spent two years honing his craft at the William Esper Studio, studying under the direction of Barbara Marchant.

By the time he met Dr. Tyndall, he had already taken his brand of comedic acting on “Inside Amy Schumer,” and in the ensuing months would appear on “The Steve Harvey Show” and “The Nightly Show With Larry Wilmore.”

Yet before he laughed alongside such household names on national television, he spent many nights in a lonely apartment in Queens, with no family to lean on after his mother, who worked as a nanny in New York, and his father, who drove a taxi cab, went back to Bangladesh.

“My life has been filled with too many wasted years,” he said.

Indeed, Mr. Rabbani was 27 in 2012 when he was finally able to get a work permit, which came immediately after DACA provided temporary protection, he was 28 when he got a driver’s license.

“Due to my undocumented status, I couldn’t do the things that most teenagers traditionally do, like working and driving,” said Mr. Rabbani, who took jobs at a McDonald’s in Queens and later at a car dealership there before turning his attention to acting and comedy.

“There wasn’t a friend I trusted enough with whom I felt I could share my frustrations,” he said. “But I really needed someone to talk to at that time, so I ended up seeing a therapist.”

Dr. Tyndall, an American citizen of English, Irish and Hungarian descent, said that marrying Mr. Rabbani would not affect his immigration status, and that while she felt “terrible” about his situation, she never once considered it a deal-breaker as far as their relationship went.

“This was a wonderful man who made a name for himself despite the odds against him,” she said. “I wasn’t going to let his immigration status dictate how I really felt about him.”

They began dating steadily and traveling as often and as far away as they could within the legal boundaries of Mr. Rabbani’s world, including trips to Hawaii and Puerto Rico.

“I have never felt limited by the travel restrictions put upon Fariaz as much as I have felt a sense of hopelessness regarding his situation,” Dr. Tyndall said. “Nothing will ever change unless Congress comes together and changes their ridiculous immigration laws.”

They were engaged Aug. 1, 2019, in Mr. Rabbani’s Sunnyside apartment that he now shares with Dr. Tyndall, along with their two adopted cats, Billy Zane and Rose, and their 8-monthr-old Corgi, Rambo.

“Every day with Fariaz is like a vacation day,” Dr. Tyndall said. “He’s a very intelligent, driven and passionate person, and though he can be a little headstrong at times, he’s so much fun to be around.”

They were married Feb. 18 at the Lake viewing area in Central Park, gathering on a cloudy day before Kyla Kuvach, a friend of the couple who became a Universal Life minister for the event. Jesse DeZenzo, Ms. Kuvach’s fiancé, was their only witness.

Ms. Kuvach, who was once the groom’s roommate, is now a public defender in the Bronx. “Our immigration laws are racist, not functional and do not recognize or reward valuable members of our society, like Fariaz,” she said as she brushed away tears.

Since Mr. Rabbani’s parents could not attend the ceremony, the bride and groom chose to honor them by making it a low-key affair, with no attendants or attendees.

Dr. Tyndall, clutching a bouquet of pink and ivory roses and ranunculus began her vows: “Now that I know where this is going, I want to thank you for everything you are to me. For being practical and playful, for being emotionally available, supportive and even therapeutic at times.”

Then it was the groom’s turn.

“Allison, when I met you I was searching for a purpose in life and trying to have a sense of belonging, be it somewhere or with someone,” he said. “And every time I’d see you I wouldn’t want it to end because I’d feel like where I belong is wherever you are.”

The newlyweds began making their way out of the park, the bride turning heads in a blush wedding gown and ivory veil by David’s Bridal, the groom looking sharp in a black tuxedo by Calvin Klein. A cyclist sped past them and put smiles on their faces by shouting “Congratulations, God bless both of you!”

Mr. Rabbani was smiling a short time later at Asiate, a restaurant inside the Mandarin Oriental hotel on Columbus Circle, where the small wedding party celebrated. He mentioned that he had called his mother immediately after the ceremony to tell her and his father that he had just been married, and that he would soon be sending them the video, via email.

“I love you both and I’m always praying for you,” his mother told him during that call. “I wish I could have been there in person.”

Where The Lake viewing area, Central Park in New York

Meet the Bride On her Christmas break this year, the bride is planning to travel to Bangladesh, alone and for the first time, to meet her in-laws.

A Ring and a Kiss In September 2019, five weeks after the couple got engaged, the bride walked through her father’s door in Girard, Ohio, wearing her new engagement ring. “He was like ‘awww,’ and then he kissed my ring,” Dr. Tyndall said, laughing. “He’s a very sentimental man, and I thought it was sweet.”

On Video The bride’s father also received the wedding video. “Of course you want to be at your daughter’s wedding, but my wife and I understood their reasoning and we respect it,” he said. “It’s almost an impossible situation for Fariaz.”