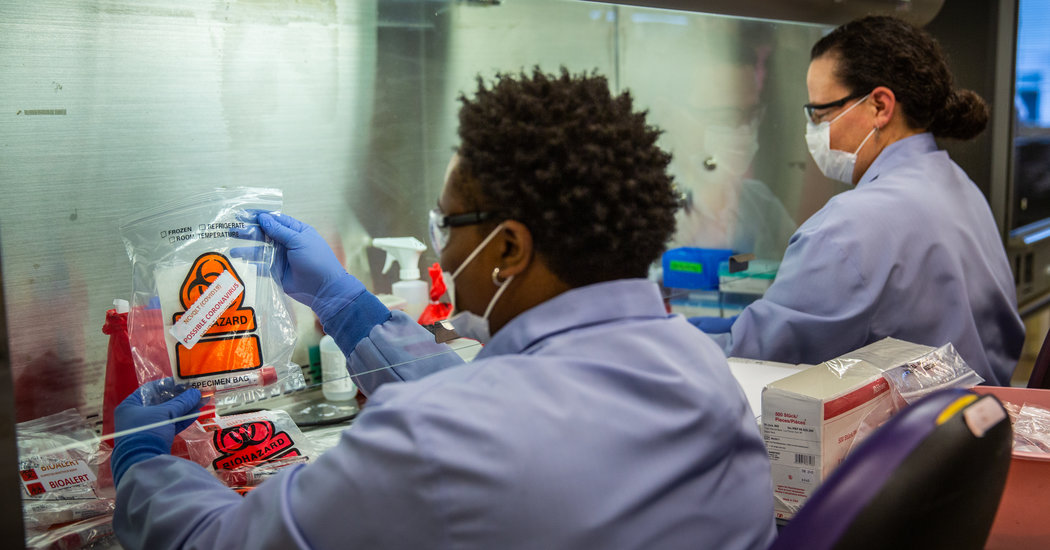 President Trump claimed again on Friday that anyone who needed a coronavirus test “gets a test.” But from Washington State to Florida to New York, doctors and patients are clamoring for tests that they say are in woefully short supply, and their frustration is mounting alongside the growing number of cases around the country.

In California, where thousands are being monitored for the virus, only 516 tests had been conducted by the state as of Thursday. Washington health officials have more cases than they can currently process. And in New York, where cases have quadrupled this week, a New York City official pleaded for more test kits from the C.D.C.

“The slow federal action on this matter has impeded our ability to beat back this epidemic,” the official said in a letter Friday.

More than 300 cases have been confirmed, at least 14 have died, and thousands are in self-quarantine. Public health officials are warning that no one knows how deeply the virus will spread, in part because the federal government’s flawed rollout of tests three weeks ago has snowballed into an embarrassing fiasco of national proportions.

In the last week, Mr. Trump and his top officials repeatedly promised that 1 million to 1.5 million tests would be sent around the country, even though labs — government and private ones alike — have struggled to get the tests running amid a growing number of infections and rising demand for tests. Despite an order Wednesday by the C.D.C. to greatly expand criteria for who can be tested, many hospitals and state health authorities continued to limit tests to those at the highest risk for infection, adding to the confusion and frustration, especially in hot spots like California and Washington.

In California, Cindy Homen, 58, followed the advice she had heard from public health officials this week and emailed her primary care doctor about getting tested, at Kaiser Permanente Medical Center in Santa Rosa, Calif., when she started to come down with coughing fits and a sore throat.

She received a reply Thursday telling her she did not need to get tested, that most people exposed to the virus recover after experiencing mild symptoms. She was advised to wash her hands and stay home. “At this point, testing is very limited,” her doctor wrote.

“This whole thing is just a big joke,” Ms. Homen said. “How do they track the coronavirus if there aren’t enough test kits and they don’t even want you to come in?”

Over the past few days, Vice President Mike Pence has been moderating expectations about how quickly the tests would be widely available. On Friday, Mr. Pence said it would be a “matter of weeks” before Americans could get easy access to a coronavirus test.

And on Thursday, he seemed to acknowledge that the administration’s estimates were high. Speaking at a 3M plant in Minnesota where another item in short supply — respirator masks — are made, he said, “We don’t have enough tests today to meet what we anticipate will be the demand going forward.” Mr. Pence added: “For those who we believe have been exposed, for those who are showing symptoms, we’ve been able to provide the testing,” he added.

On Friday, Alex M. Azar II, the secretary of health and human services, was prompted to speak by the president at the White House signing of the $8.3 billion emergency spending bill for the coronavirus. Azar told reporters: “I just want to make it clear that in terms of tests, we have provided all the tests to the state of Washington and the state of California that they’ve asked for. The production and shipping of tests that we’ve talked about all week is completely on schedule.”

Mr. Azar said the C.D.C. had shipped out materials capable of testing 75,000 people to state and local government labs. In addition, he said, Integrated DNA Technologies, the private contractor working with the C.D.C. to ship to the private sector and hospitals, has already distributed enough materials for 700,000 tests.

At a short news conference during the president’s visit to the C.D.C. lab in Atlanta on Friday, Dr. Robert R. Redfield, the director of the C.D.C., said the agency had never denied a request by local public health officials. “All of our state labs now have the ability to test for this virus,” he said.

Mr. Trump interjected at one point, as administration officials explained the timetable for rolling out tests to the states. “Anybody right now and yesterday, anybody that needs a test gets a test,” the president said. “They’re there. They have the tests and the tests are beautiful.”

But states and public health experts are warning that access is still limited and varies from state to state, hampering the ability to know how far the virus has spread or for how long it has gone undetected in some regions of the country.

After weeks of delays by the C.D.C. because of a “manufacturing problem” in one component of its test, and the Food and Drug Administration’s refusal to lift testing restrictions for large academic centers or private companies until Feb. 29, many laboratories have begun to process tests only in the last few days. There still is no central reporting system to track the number of tests conducted or the number of patients who have been tested.

It is nearly impossible to know precisely how many people in the United States have been tested for the coronavirus. The C.D.C. reported Thursday that it had tested 1,583 patients since the beginning of the outbreak, but it is not making public how many tests are being done at state and local public health laboratories, despite publishing similar data on the seasonal flu. Many local labs are just beginning to receive long-delayed test kits and, even at full capacity, will only be able to run about 100 tests per day.

A total of 71 public laboratories in 47 states and the District of Columbia had the capacity to test for the coronavirus as of Friday afternoon, according to the Association of Public Health Laboratories, which represents government laboratories around the country. That’s up from just eight labs able to process tests last Thursday.

“We’ve seen major progress with essentially the lights coming on across the country,” said Scott Becker, the association’s chief executive.

But the delays mean that, “we’re absolutely a few weeks behind where we should be,” he said, adding that, “There is no way you can sugarcoat that.”

Maine said it was still bringing its state laboratory online. Pennsylvania officials said they would have the capacity to test 150 specimens a day at the state laboratory beginning this weekend. Arkansas can process eight to 10 tests daily, and has so far tested six patients.

“The reason that’s important, the reason that meets future demand is because the enormous capacity of these commercial laboratories and others in the country are precisely how we will make coronavirus tests available for your local doctor, available to your pharmacy and broadly available to the American public,” Mr. Pence said at the White House coronavirus task force briefing Friday.

But Wendy Bost, a Quest spokeswoman, sounded a more cautious tone. “While we believe we have capacity to accommodate initial demand, this is an evolving situation and we anticipate building additional capacity over time,” she said in a statement.

Dr. Alex Greninger, an assistant professor at the University of Washington Medical Center in Seattle, the epicenter of the nation’s outbreak, said the university’s lab has tested about 400 patients since it set up operations earlier this week under new federal guidelines. The lab can yield results in about eight hours and is testing patients from several hospitals around Washington State. “I’m entirely focused on testing and building out operations that can handle thousands of tests a day,” he said.

Meanwhile, the state laboratories in Washington have more cases than they can currently process.

“We have a small backlog that we hope to be through very soon,” said Danielle Koenig, a spokeswoman for that state’s health department. The agency has tested 91 patients as of Wednesday, and attributed the backlog to both a lack of staffing and physical capacity. Their facilities can currently handle 200 samples per day, with each patient requiring between one and three tests.

In Florida, Gov. Ron DeSantis cautioned that the state had not yet received enough testing kits. “I know they have tens of thousands that will eventually be en route,” he said. “We’d like to get them, obviously, as soon as possible.”

So far, the state is conducting tests at three public health labs in Miami, Tampa and Jacksonville.

The C.D.C.’s decision to remove most criteria for testing took some state officials and large health systems off-guard.

“Everyone under the sun who is going to develop a cough is going to want to get a test for coronavirus,” Dr. Mark Levine, the commissioner of Vermont’s health department, said on the day the changes were announced. On Friday, Vermont health officials said they had run eight tests in the state. Many states reported on Friday that they had run only a handful of tests.

In several states, health officials have been sending out guidance to physicians encouraging them to first test for other likely causes, such as flu, before sending samples to state laboratories.

“We realize people are scared — we recognize that,” said Dr. Dean Sidelinger, the state epidemiologist in Oregon, but he added that it was important to prioritize people at the highest risk.

Mr. Becker, of the public health lab association, said he worried that mixed messages from the Trump administration could create demand for testing that “has the potential to overwhelm the public health system, and the country.”

In Colorado, Scott Bookman, the incident commander overseeing the coronavirus for the state’s health department, warned: “We don’t have unlimited supply going forward, so we want to be careful with that.”

Mr. Bookman said Colorado had tested samples from 100 patients, and its lab could test samples for 160 patients per day, if needed. State health officials announced Colorado’s first two infections on Thursday, with additional cases on Friday.

Utah, where one patient has been treated for coronavirus, can test about 30 people daily. That’s enough to keep up with current demand but there are potential bottlenecks: Parts of the test are conducted manually, and supplies that come from outside vendors may become scarce.

“We’re not turning away tests, but our capacity right now is limited by the fact that we have a human being extracting the DNA,” said Jenny Johnson, a Utah spokeswoman.

Doctors and lab officials alike say that the lack of clear communication from the government was hampering rather than helping their efforts.

Dr. John Strayer, an emergency doctor at EvergreenHealth in Kirkland, Wash., where some of the patients infected with the virus had been admitted, said the loosened criteria “has added to my work.”

He said he now has to triage patients based on whether they were sick enough to need a test urgently or not. Most people are sent back home and told to quarantine until they get better.

Kate Mannle, 37, of Seattle spent a week trying to get tested. Ms. Mannle returned Saturday from an overseas trip that included a layover in South Korea, which is experiencing an outbreak of the new virus. On Sunday, she developed a fever and a cough, but was told by her doctor and hospitals that she was not sick enough to get tested.

Ms. Mannle, the director of training programs for a conservation nonprofit, quarantined herself inside her one-bedroom apartment in Seattle, where she spent the week sleeping, doing a little yoga and trying to recover from her 101-degree fever and respiratory infection. She plans to stay inside until 24 to 48 hours after her cough goes away. She suspects she did indeed contract the virus, but she will probably never know for sure.

“They’ve put up so many barriers,” she said. “I’m tired of it and I’m ready to move on.” She added: “But what about the next one? What if this had been Ebola?”