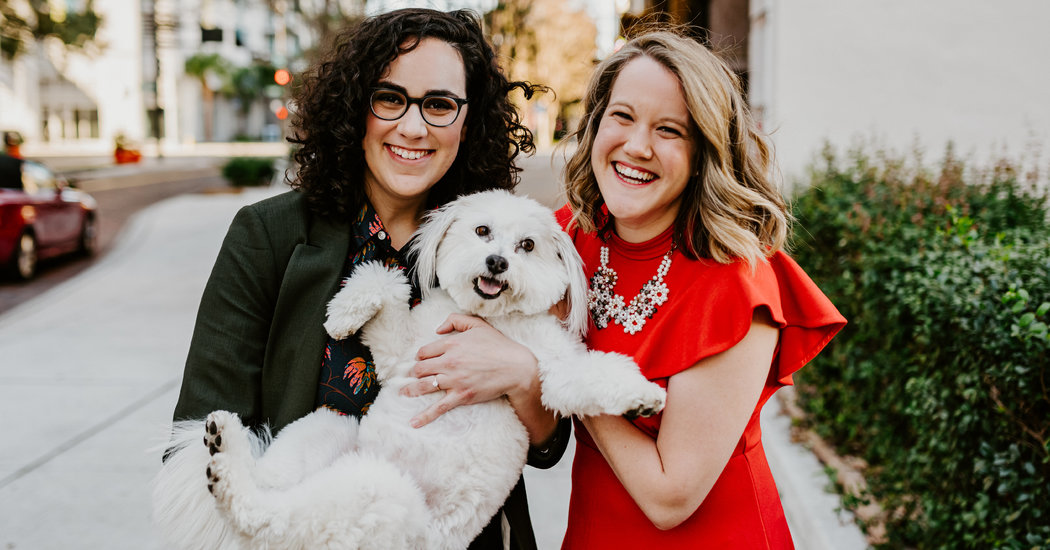 Shortly after Rachel Sutton texted Meredith Mechanik and asked her on a third date, Ms. Mechanik texted back and said she no longer wanted a romantic relationship with Ms. Sutton, and hoped instead that they could remain friends.

Ms. Sutton (left), who is now 29 and an assistant director of graduate admissions at the University of Tampa, was on her cellphone chatting with her mother when Ms. Mechanik’s text dropped like a dagger, and she began to cry.

“I just didn’t see a breakup coming so soon,” said Ms. Sutton, who met Ms. Mechanik on Tinder in June 2014. “After all, we had a lot of fun on those two dates.”

Indeed, Ms. Mechanik, now 30 and a student program coordinator at the University of South Florida St. Petersburg, seemed to be nothing but pleased after Ms. Sutton had taken her on a first date to a concert in Tampa, where they chatted over sandwiches. Their conversation was interrupted by canvassers from Equality Florida, one of whom asked Ms. Mechanik and Ms. Sutton,“Do you two support same-sex marriage?” They signed the petition, and both said they managed to refrain from shouting, ‘We’re on a gay date!’”

Ms. Sutton then took Ms. Mechanik out on the second date, to a Chinese restaurant on a night that ended with a hug. All seemed well until Ms. Mechanik received a third invite from Ms. Sutton, who was now asking Ms. Mechanik to come to her Tampa apartment, where she would make her dinner.

“It just kind of seemed to me that Rachel was more into the relationship thing than I was,” said Ms. Mechanik, “so I texted her a note that said ‘I’m not sure I see this going anywhere romantically, but I’d love to hang out as friends.’ ”

Ms. Sutton was stunned, but refused to walk away, choosing instead to take her on a series of what she called “non-date dates,” the first of which was a trip to a wine bar.

With Ms. Mechanik leaning toward the idea of dating Ms. Sutton again, they began attending couples’ therapy together, which led Ms. Mechanik to begin opening up about the fact that she had never been in a serious relationship with a woman, and was “woefully inexperienced,” as she put it.

The more time they took to work out their differences, the more they began learning about each other.

“Meredith’s relationships, whether it be ours or with friends or family, are extremely important to her,” Ms. Sutton said. “She is a really open and honest person who has a strong moral compass, and always seems, in the end, to do the right thing.”

They officially began dating again nine months later, in March 2015, and survived one more breakup in August 2016 that lasted three months. The following month, Ms. Mechanik proposed to Ms. Sutton, and a month after that, Ms. Sutton surprised Ms. Mechanik with a proposal of her own.

Eventually, Ms. Mechanik said that she came around to realizing that Ms. Sutton “was not only brilliant, but the most patient person and the best listener I have ever met.”

■ The couple, who have a rescue dog named Penny, were married March 7 on the campus of the University of South Florida St. Petersburg. Alexander A. Mechanik, a brother of the bride who became a Universal Life minister for the event, officiated.