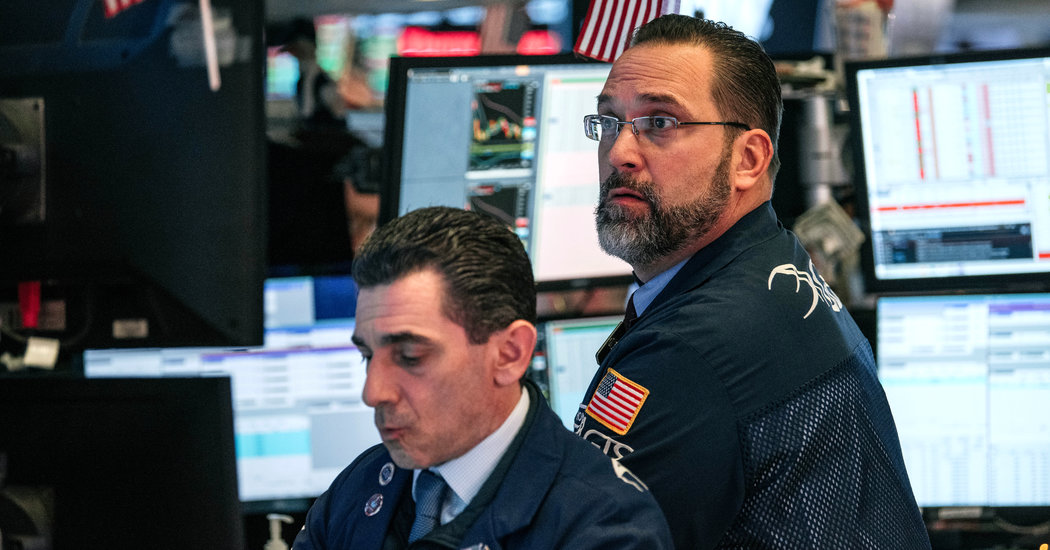 Good morning. By my count, I have given 53 elbow bumps in the past 72 hours. During that time, I’ve turned down several dozen handshakes and tried, unsuccessfully, to turn this into a thing as the coronavirus spreads. (Was this email forwarded to you? Sign up here.)

A cure for what ails investors?

Over the weekend, the global death toll of the coronavirus surpassed 3,000, with about 90,000 identified cases in 65 countries. The U.S. reported its first two deaths from the virus, both in a Seattle suburb, while New York City disclosed its first case. The latest developments, as always, can be found in our live briefing.

Stocks can also go up — sometimes. A rare sight in recent days, markets in Asia and Europe posted gains in early trading, recovering some of the ground lost during last week’s rout. (European shares are mixed at the time of writing, and U.S. futures have tipped into the red.) The turnaround, such as it is, began when Bank of Japan issued a statement pledging support to “ensure stability in financial markets,” echoing a similar notice from the Federal Reserve on Friday. Jittery markets are expecting increasingly aggressive, potentially coordinated actions from central banks around the world. (Anybody else getting 2008 flashbacks?)

“This virus doesn’t care what the Fed does,” an investor told the NYT’s Matt Phillips. But something is better than nothing, and that could be the simple narrative behind the buying today. Even after the recent correction, U.S. stocks are trading at relatively high valuations, as measured by things like the price-to-earnings, or P/E, ratio. The hit that corporate earnings will take as a result of the virus outbreak is a matter of much debate — and if it proves worse than expected, then the “P” will follow the “E” down, possibly much further down.

It’s all about the scenarios, with forecasters building out their models for how the virus might affect economies. Today, the O.E.C.D. updated its economic forecast, cutting its expectation for global growth this year by half a percentage point, to 2.4 percent. But in the worst-case “domino scenario,” a widespread outbreak could push global growth to 1.5 percent, the worst result since — you guessed it — the 2008 financial crisis.

What’s next? Although some market technicians think the sell-off is far from over, most of the research and commentary that’s landed on our desks thinks the market will soon find its feet. The recent selling has “the look of revulsion about it,” notes Bloomberg’s John Authers, which is the polite way of describing what traders call the “puke point,” suggesting that a rally is in store. How queasy are you feeling? Let us know.

We will be tracking all the day’s market moves in a special live briefing.

The activist hedge fund Elliott Management’s latest big bet is a $1 billion stake in Twitter, with the goal of shaking up the social network’s leadership. Michael did some reporting over the weekend on why the $40 billion hedge fund run by Paul Singer has set its sights on Twitter’s founder, Jack Dorsey.

Mr. Dorsey’s dual C.E.O. roles at Twitter and at Square, the financial services provider, have been a longtime concern among investors who worry about his attention span. (How many listed tech companies can you run simultaneously?)

Other things weighing on Elliott’s mind:

• Twitter’s total enterprise value is just $22.5 billion, despite being one of the most prominent internet companies around. By comparison, Facebook’s is $504 billion, and even the old-internet company eBay has an enterprise value of $33 billion. Elliott thinks Mr. Dorsey and his leadership team have not focused enough on innovation, according to people briefed on the matter.

• Twitter’s leadership has seen a lot of turnover in recent years, particularly in the C.O.O. and C.F.O. roles.

• He may view Twitter as less important. In an interview with Rolling Stone last year, he said of Twitter versus Square, “If you lose 140 characters, people are like, ‘Eh.’ If you lose $140 or even $1.40, it’s important.”

Nokia struggles to compete with Huawei in 5G

The Finnish telecom equipment giant is replacing its C.E.O. after falling behind in the race to bring out 5G wireless technology.

Rajeev Suri, the current C.E.O., failed to make headway in 5G during his half-decade tenure, falling behind Huawei and a Swedish rival, Ericsson, in securing new deals with telecom operators. That’s despite the Trump administration’s touting Nokia as one of the best hopes to blunt Huawei’s edge in the market.

Shares in Nokia have fallen more than a third during Mr. Suri’s time as C.E.O. Mr. Suri will be replaced by Pekka Lundmark, the C.E.O. of the Finnish power utility Fortnum.

🇮🇱 Voters in Israel head to the polls today for the third general election in less than a year.

🇬🇧🇪🇺Also today, trade talks formally begin between Britain and the E.U. in Brussels. The two sides are far apart on the goals of their post-Brexit relationship.

🇺🇸 Super Tuesday in the Democratic presidential primaries is on, er, Tuesday, with about a third of all delegates up for grabs in a diverse batch of 14 states. Joe Biden could get a boost because the fellow moderate Pete Buttigieg dropped out over the weekend, but Bernie Sanders remains the front-runner, and businesses are worried.

🛢 A two-day meeting of OPEC members starts on Thursday, with a bigger-than-expected production cut on the cards, as the coronavirus outbreak has led to an oil price slump.

📈 The U.S. jobs report is out on Friday, with most analysts expecting another strong result for February hiring.

🛍 Throughout the week, a number of retailers will report earnings, including Target, Costco, Kroger, Abercrombie & Fitch, and Dollar Tree and Family Dollar. Analysts will probably quiz execs on whether they are seeing sales slow as a result of the coronavirus. (Remember that consumer spending accounts for around 70 percent of America’s G.D.P.)

• Britain’s Competitions and Markets Authority is the toughest antitrust regulator worldwide, having frustrated more deals than any other. (FT)

• The hedge fund magnate Chris Hohn is threatening to sue Barclays, HSBC and Standard Chartered over their lending to coal mining companies. (FT)

• Behind Michael Milken’s pardon was an array of allies in President Trump’s inner circle. (NYT)

• A group of unions has asked the F.T.C. to investigate Amazon over what they describe as anticompetitive practices. (CNBC)

• Why gold plunged on Friday: a thread. (@EdVanDerWalt)

Thanks for reading! We’ll see you tomorrow.