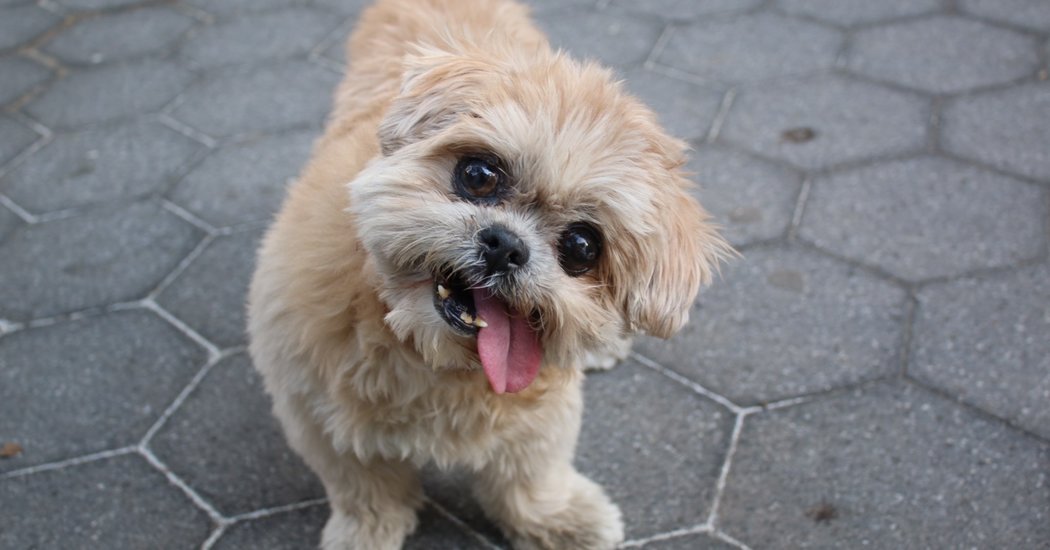 Marnie, the Shih Tzu whose lolling tongue, amused expression and tilted gait made her a celebrity on Instagram, died on Thursday at her Los Angeles home. She was 18.

“She passed very, very peacefully,” said Shirley Braha, who adopted Marnie from a Connecticut shelter in 2012. “She passed away of old age is the simplest way to put it.”

Marnie’s quizzical face and uncanny gift for posing garnered 1.8 million followers on Instagram and turned her from a filthy rescue dog into a poster pet for adopting older animals.

She posed with the likes of Katy Perry, Tina Fey and Selena Gomez; got a book deal; and at one point became so famous that her absence at the 2015 World Dog Awards made headlines on TMZ.

“Marnie knew that she was famous and she absolutely loved it,” Ms. Braha said on Saturday. “She loved it when crowds would form around her. She would do little dances. She would pose. I never trained her to do it. She just looked straight at the camera and stayed still and gave everyone the most perfect selfies that they wanted. She was a pro.”

Marnie’s unlikely rise to fame began after Ms. Braha found her in a Connecticut shelter.

She had been found on the streets by animal control officers and named “Stinky” by shelter workers because she smelled so badly.

Ms. Braha, who had never had a pet before, fell in love with a picture the shelter posted on PetFinder. The dog was looking straight into the camera with a bemused look that said, “What the heck am I doing here?” Ms. Braha said.

When she arrived at the shelter, the dog’s fur was dirty and matted. Ms. Braha named her Marnie after the musician Marnie Stern.

On the train from Connecticut to New York, passengers stared. One businessman looked at the dog and said, “ferocious.”

It turned out Marnie had 14 rotten teeth, which did not explain the dog’s most curious feature: her long Gene Simmons-like tongue that lolled out to the side, making it look as if she was always laughing. Marnie just had a very long tongue, Ms. Braha said.

Once she was cleaned and had dental surgery, Marnie was like a new dog.

She insisted on going everywhere with Ms. Braha and barked for hours when she was left alone. Marnie accompanied Ms. Braha to her favorite bar in Williamsburg in Brooklyn, and to parties and restaurants. A couple of times, Ms. Braha sneaked Marnie in to her job at MTV, where she was a producer.

“She loved to party,” Ms. Braha said. “You’d bring her out to a group of people, her tail would wag, her tongue would hang out, and she would run around in circles.”

In 2014, after the MTV division she worked for folded and she was laid off from her job, Ms. Braha began posting more and more photos of Marnie on Instagram.

It began as more of a hobby and a way to spend time with her attention-hungry dog than an effort to join the ranks of other pets who had become famous online.

“I was just doubtful anyone would care,” Ms. Braha said of her early pictures. “There is so much content online and it’s almost like the aspiration of fame seems so trite that it just didn’t appeal to me.”

But before she knew it, she was getting more followers.

“Once I started doing it, I realized that I was having a lot of fun and she was enjoying it,” Ms. Braha said of Marnie.

By 2015, The New Yorker had decreed Marnie “the most famous American dog on Instagram.”

Ms. Braha said people would write or stop her on the street to tell her that Marnie’s story had inspired them to adopt an older pet. As Marnie got older and winters made it harder for her to go outside, Ms. Braha decided to move to California from New York.

“Our relationship was that of two best friends,” she said. “When she became more geriatric, I was more of a caretaker.”

During her final days, Marnie was listless but still cheerful and had enough of an appetite to munch on her favorite foods of chicken and greens.

But an ulcer had developed on the dog’s gums and because of her age, it was not healing.

“Her body just didn’t have the defense to fight off small things like that,” Ms. Braha said. “It was causing her a lot of pain. Her body was just shutting down.”

Ms. Braha warned Marnie’s 1.8 million Instagram followers to prepare to say goodbye and kept them updated about the dog’s spirits and trips to the veterinarian.

On Thursday, she gently petted Marnie and fed her chicken before she died quietly in her dog bed.

Ms. Braha said she has the company of another rescue dog, a 10-year-old she named Gilda whom she adopted a month ago and believes is a Pomeranian mix. She also has the warm wishes of Marnie’s many fans.