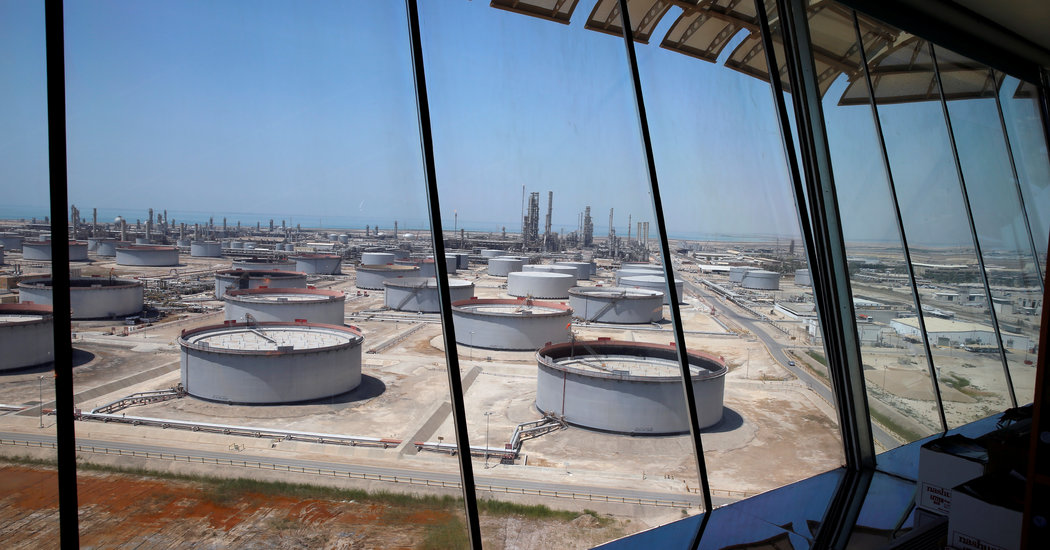 Saudi Arabia appears ready to increase oil production, putting more pressure on crude prices, after the collapse of a meeting on Friday between the Organization of Petroleum Exporting Countries and Russia caused prices to drop more than 9 percent.

On Sunday, the uncertainty rocking the oil industry in the wake of depressed demand caused by the coronavirus outbreak was reflected in Persian Gulf stock markets. Shares in Saudi Aramco, the national oil producer for Saudi Arabia, fell for the first time below its December initial public offering level. The Riyadh stock exchange fell more than 8 percent. On the Kuwaiti exchange, trading on a major index was halted after it tumbled 10 percent.

The prospect of more oil on the market could accelerate the collapse in prices, which have fallen about one-third this year — good news in the short-run for consumers, but adding to economic pressures on oil producers.

Saudi officials are preparing to ramp up the kingdom’s oil output in order to compensate for the lost revenue caused by lower prices, according to someone who has been briefed on the matter. To stoke demand, they are offering even lower prices, the person said.

Russia and Saudi Arabia are the two largest crude suppliers to China, which has recently been the largest importer.

Whether producing more oil will help is another question. There is no easy cure for the predicament that Saudi Arabia and the rest of the oil industry face. The world is awash in oil, analysts say, with demand likely to continue to decline. It is not clear where greatly increased production would go, and more oil would likely further depress prices.

“I wouldn’t understand the logic behind a strategy like that,” Sadad Al-Husseini, a former executive vice president of Saudi Aramco, said in an interview.

“It doesn’t sound like a solution to the situation the markets find themselves in,” added Mr. Husseini, who now heads a consulting firm called Husseini Energy.

The situation recalls a crisis in 2014. Facing growing volumes of oil from shale producers in the United States, the Saudis walked away from trying to manage the markets when they were unable to persuade Russian officials to cooperate in cuts.

That strategy, described as a move to defend market share, eventually led prices to fall below $30 a barrel and helped persuade Russia to join OPEC in a production management pact that has helped prop up prices for the last three years by coordinating cuts in output.

The Saudis have long absorbed by far the largest portion of these agreed cuts, while Russia made modest trims, but that practice may end because the agreement is scheduled to expire at the of March. It appears likely to be a casualty of the bust-up between OPEC and Russia that occurred on Friday after three days of meetings at OPEC’s headquarters in Vienna.

At the meetings, Russia declined to go along with a Saudi-led proposal to cut 1.5 million barrels a day, or around 1.5 percent of global supply, to deal with plunging demand because of the spreading coronavirus epidemic. The two sides also failed to agree on an extension of existing cuts of 2.1 million barrels a day. That failure opens the way for increases by those producers that do have additional capacity.

Falling prices are a massive problem for Saudi Arabia and other oil-dependent nations. Low prices erode the petroleum revenues that sustain the government budgets of these countries.

Jim Krane, a Persian Gulf analyst at Rice University’s Baker Institute, figures that oil prices are already well below the $80-a-barrel level or so the Saudis need to finance government spending.

Low oil prices, now about $45 for Brent crude, the international benchmark, and $41 for West Texas Intermediate, the U.S. marker, can also stoke discontent with governments.

A weakened Aramco share price — it was trading nearly 9 percent lower on Sunday, at 30.05 riyals, below the 32 riyal price for its initial listing in December — price could be a blow to the prestige of the country’s key decision maker, Crown Prince Mohammed bin Salman. He led the campaign to bring Aramco to the public markets, and many Saudis bought shares.

The crown prince’s ambitious and expensive economic development program known as Vision 2030 could also be in trouble, Mr. Krane said, if oil producers open the taps, beating down prices.

“A price war would cause the Saudis to put the entire Vision 2030 diversification plan on hold, while the kingdom hunkers down on austerity wages,” Mr. Krane said.

In what may signal increasing political jitters in the kingdom, the prince has detained members of the royal family considered to be potential rivals for his authority.