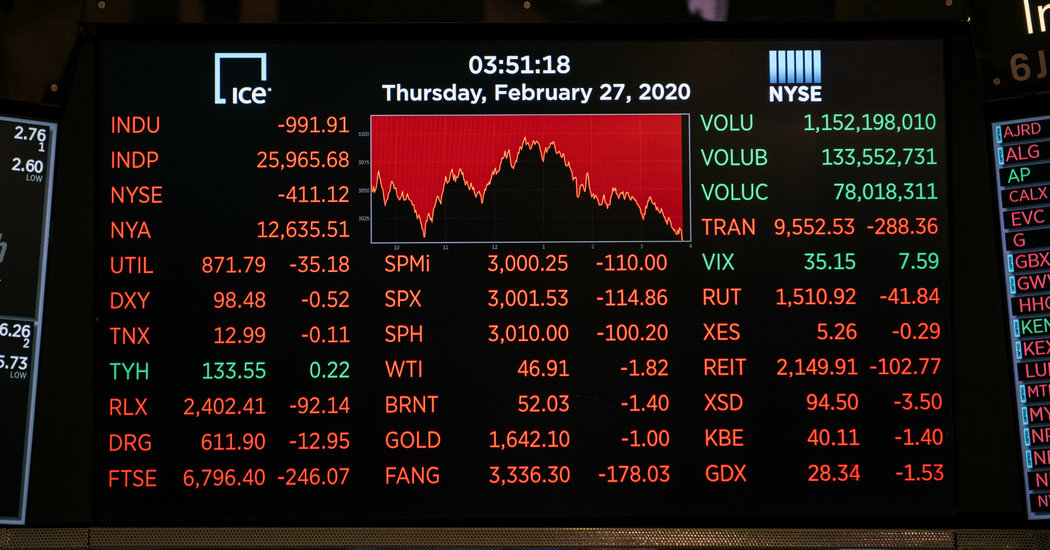 Want this in your inbox each morning? Sign up here.

“Brutal virus selling” is a blunt but effective way to describe the market rout over the past six trading days. Asian and European markets are down again today, and U.S. futures suggest that stocks on Wall Street are poised to fall for a seventh consecutive session.

More than a dozen countries have reported their first cases over the past 48 hours. Today, that includes patients in New Zealand and in Nigeria, which is the first confirmed case in sub-Saharan Africa. Follow our live briefing for the latest developments.

The speed of the sell-off set a record, with the S&P 500 suffering its quickest correction — that is, a 10 percent fall from its recent peak — since the Great Depression. (For what it’s worth, until there is a 20 percent decline, the current bull market technically remains intact. It has risen 340 percent since the market last bottomed out in March 2009.)

But this might be more than a short-term hit to earnings, analysts and execs warned. Putting off purchases or postponing trips is one thing, but the longer the outbreak goes on — and the wider it spreads — the greater the chance that forgone economic activity may be lost forever. That is what is driving the sell-off now, some market watchers say. Facebook canceled its annual developer conference, and the parent companies of British Airways and EasyJet warned today that the virus would hit their profits.

“This is not a time for fear,” said Dr. Tedros Adhanom Ghebreyesus, the director general of the World Health Organization. Tell that to the markets, where the VIX index of volatility — otherwise known as the “fear gauge” — now looks like this:

What can be done? “The Fed can’t stand by as markets melt,” Ian Shepherdson, chief economist at Pantheon Macroeconomics, wrote in a research note to clients. Futures trading now suggests that a rate cut at the Fed’s meeting next month is a sure thing; a month ago, traders predicted that such a move had a less than 10 percent chance of happening. Reducing already-low rates won’t cure the market — an actual vaccine for the coronavirus is what’s needed — but it’s better than nothing, Mr. Shepherdson said:

Rate cuts won’t prevent the economic hit from supply chain disruption or demand compression as a result of the virus. But they would make it cheaper for businesses to finance the extra working capital to carry them through a period of weaker demand, and they would signal to markets that the Fed is actively seeking to ease the pain.

Countries have begun to unveil huge economic stimulus programs, with South Korea distributing more than $13 billion in emergency funds for businesses and consumers, similar to an earlier $15 billion plan in Hong Kong. And China is relaxing its rules on how banks deal with bad loans, giving borrowers and lenders more of a cushion as economic activity grinds to a halt.

Senator Bernie Sanders has co-sponsored a bill that would change the treatment of stock options and executive retirement plans. It could have big consequences for start-ups.

Mr. Sanders’s proposal has two prongs. The best-paid recipients of stock options would be taxed on those grants upon vesting, rather than when they’re exercised. Executives would also have to pay taxes on some types of deferred compensation sooner than current regulations allow.

It revives a proposal initially floated by Republicans in early versions of the 2017 tax overhaul, which was dropped within days amid fierce opposition from corporate lobbyists and C.E.O.s. The bill has no chance of passing the current Congress, but is seen as a statement of intent from Mr. Sanders, the front-runner in the race for the Democratic nomination.

The options change could lead to big tax bills for high earners, even if they haven’t sold any shares (either because they don’t want to or because the holdings are underwater). It would make a popular way of paying start-up employees much less attractive.

Steven Seagal takes a hit from the S.E.C.

The actor may be hard to beat in his action movies, but the S.E.C. has landed a financial blow, fining Mr. Seagal for failing to disclose that he was being paid to promote a cryptocurrency on his social media accounts, the NYT’s Julia Jacobs writes.

Mr. Seagal had been promised $1 million — $250,000 in cash and $750,000 of cryptocurrency — from Bitcoiin2Gen in exchange for promoting the company’s initial coin offering. Nowhere in Mr. Seagal’s posts or in Bitcoiin2Gen’s marketing materials — where he was called a “Zen Master” — did his compensation come up, as is required by S.E.C. rules.

As part of his penalty, he agreed to forfeit $157,000 (which is what he was ultimately paid) and to pay the same amount in civil penalties. He’s also barred from promoting securities for three years.

The puns we resisted (well, until now): Under siege, Mr. Seagal’s scheme was marked for death; the case gave him exit wounds and left him legally pistol whipped; the S.E.C.’s executive decision showed it was out for justice with a force of execution; and the case proved that nobody is above the law.

A trio of tech magnates are publicly fretting about the rise of Chinese companies — betraying Silicon Valley’s concern about a looming threat from Beijing.

• Eric Schmidt, the former Google chairman: In an NYT Op-Ed, he said the U.S. government needed to help American businesses compete against Chinese tech rivals, particularly in artificial intelligence. “Ultimately, the Chinese are competing to become the world’s leading innovators, and the United States is not playing to win,” he wrote.

• Sheryl Sandberg of Facebook “If people are concerned about data I think there’s a lot to be concerned about there” she said of TikTok to NBC News’s Dylan Byers. (She also said she was worried that TikTok had grown faster than Facebook did at the same stage of its life.)

Much has been written about the hundreds of millions of dollars that Mike Bloomberg’s presidential campaign has been spending on political ads. But Nick Corasaniti and Lazaro Gamio of the NYT show in graphics just how remarkable those ad buys have been.

The chart above shows the share of candidates’ TV ads that ran in Super Tuesday media markets, for example. The NYT has some eye-popping charts for the Texas, Minnesota, Los Angeles and San Diego markets as well. It’s worth a click.

“This was truly unprecedented, in how much money he spent, how quickly he spent it and how unopposed that money was,” Ken Goldstein, a professor of politics at the University of San Francisco, told the NYT.

• “Facebook: The Inside Story” by Steven Levy. In an NYT book review, our colleague Natasha Singer writes, “It is a largely sympathetic, and occasionally fawning, portrait of Facebook that seems at odds with the company’s recent emergence as an avatar for the risks of unchecked corporate power.”

• “Uncharted: How to Map the Future Together” by Margaret Heffernan. “Whether you’re running a multinational, pondering a career change or being a parent, the same wisdom applies: Sometimes things go wrong, or go right, and we don’t know why,” writes Tim Harford in a review for the FT.

• Corner Office interview with Laurene Powell Jobs. The investor and philanthropist tells our colleague David Gelles about how she uses her riches: “I’ve dedicated my life to doing the very best I can to distribute it effectively, in ways that lift up individuals and communities in a sustainable way.”

• Thyssenkrupp agreed to sell its elevator business to the private equity firms Advent International and Cinven for 17.2 billion euros, or about $19 billion. (FT)

• DoorDash, the food delivery app, said it had filed confidentially for an I.P.O. (TechCrunch)

• Some Wall Street executives quietly say they’d be OK with Senator Bernie Sanders as president, because they don’t think he can accomplish much of his agenda. (Vanity Fair)

• Watch this space: A British court rejected plans to expand Heathrow Airport because the government illegally neglected its obligations under the Paris climate accord. (NYT)

• Microsoft and IBM have signed on to a Vatican proposal outlining the ethical uses of AI. (Reuters)

• Wells Fargo agreed to pay $35 million to settle an S.E.C. investigation into whether the bank improperly steered customers to risky exchange-traded funds. (WSJ)