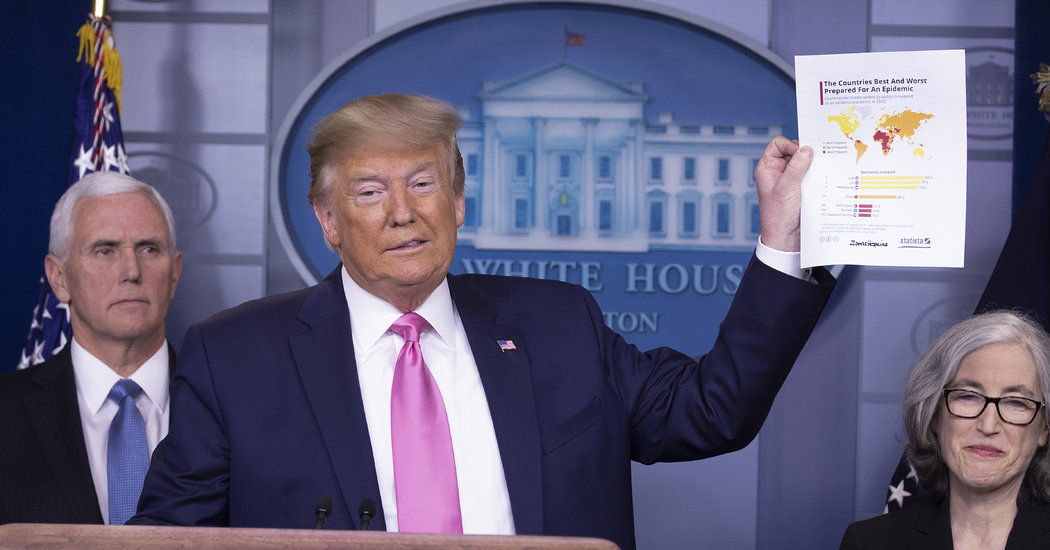 Want this in your inbox each morning? Sign up here.)

President Trump said yesterday that Vice President Mike Pence would coordinate the government’s response to the coronavirus. Despite mounting criticism, the president has played down the danger of a widespread U.S. outbreak, the NYT reports.

Stocks are down again today, with U.S. futures suggesting that a sixth consecutive daily decline awaits. Wall Street strategists say the situation could get worse before it gets better.

Yet shares in companies that cater to people staying home are outperforming — think disinfectants (Clorox), canned food (Campbell Soup), exercise equipment (Peloton) and videoconferencing tools (Zoom) — as are others like drug makers developing vaccines (Gilead) and gold miners who dig up the stuff hoarded by people freaked out about the economy (Newmont Mining).

Companies are restricting travel and sending workers home, and rapidly reducing their expectations for sales at any business that relies on China as a buyer or supplier. (Microsoft is one of the latest to sound the alarm.) Quarantines and travel bans are particularly bad for deal makers who rely on in-person schmoozing, with bankers prevented from meeting clients. The problem goes beyond Asia — although it’s especially acute there.

We’ll get a better view of the economic impact soon, and analyst forecasts for data releases due in the coming days are all over the place. Chinese officials are under pressure to rev up factories and get workers moving again, while some European authorities are questioning the region’s open-border policies. In a WSJ opinion piece, Kevin Warsh, a former Fed governor who is considered a front-runner to lead the U.S. central bank if Mr. Trump is re-elected, floated the idea for a coordinated global series of rate cuts to “make the most of scarce policy ammunition.”

For more on the coronavirus — much, much more — subscribe to the NYT’s new Coronavirus Briefing email, with the latest developments and expert advice on prevention and treatment.

In an industry obsessed with blockbusters, Disney’s choice for its next C.E.O., Bob Chapek, lacks star power. Mr. Chapek, the company veteran who currently runs its theme parks and cruise ships, is largely unknown in much of Hollywood, the NYT’s Brooks Barnes reports.

Getting to know Bob C., as he’s called within Disney: Although he isn’t a fixture in TV and movie circles — unlike his charismatic predecessor, Bob Iger — Mr. Chapek isn’t as surprising a choice to take over the House of Mouse as it may seem.

Retail titans are big fans, stemming from Mr. Chapek’s stints as head of Disney’s DVD and consumer products businesses. This is a good sign for Disney as it pivots to selling content directly to consumers via its nascent streaming service instead of relying on cable networks.

• Doug McMillon, Walmart’s C.E.O., said, “Bob has always been someone we can trust to deliver on what he says.”

• Brian Cornell, Target’s chief, said Mr. Chapek had a “deep understanding of what Disney fans really love about their brand.”

Brooks wraps it up for us:

The timing of the announcement feels suspicious to a lot of people. Something else has to be afoot, right? But everyone I talked to inside and outside of the company, including people who are not fans of Bob Iger (they exist), insisted that nothing prompted this beyond a need to get succession moving — Disney’s annual meeting is March 11 — and that the handoff is less abrupt than it seems at first blush.

Mr. Iger is not going anywhere for another 22 months. Full stop. He will be overseeing all of Disney’s “creative endeavors,” which is basically everything that really matters, as executive chairman. Bob Chapek essentially has training wheels on for the next two years.

Why not just elevate Mr. Chapek to chief operating officer or president, two jobs that currently don’t exist at Disney and would signal that he is the heir apparent? Because that has not worked out particularly well for Mr. Iger in the past. He chose that route for Thomas O. Staggs, who ended up leaving the company in 2016. It’s really hard to shine when you have no direct reports and a larger-than-life boss.

People also forget that Mr. Iger’s run as president of Disney under then-C.E.O. Michael Eisner was torturous at times. Mr. Iger sometimes found himself undercut by division leaders, who would go straight to Mr. Eisner. By making Mr. Chapek chief executive right out of the gate, that kind of end run is harder.

Tensions among several of SoftBank’s senior executives are well known. But a striking new WSJ report on alleged efforts by the head of its Vision Fund, Rajeev Misra, to discredit internal rivals is on another level. The WSJ reports that an associate of Mr. Misra’s tried to spy on rivals, including by obtaining and then leaking private bank statements. One purported scheme involved trying to entrap an executive in a sex scandal.

A representative for Mr. Misra told us: “These are old allegations which contain a series of falsehoods that have been consistently denied. Mr. Misra did not orchestrate a campaign against his former colleagues.”

But a spokeswoman for SoftBank said the company would be “reviewing the inferences made by The Wall Street Journal.”

Common wisdom is that individual investors have no hope of beating institutional money managers. But Luke Kawa of Bloomberg Businessweek reports on how traders on Reddit’s freewheeling WallStreetBets forum — who go by names like “yolo_tron” — are changing the game.

What they’re doing: swamping the market with call options, hoping to force market makers to buy the underlying stock, and exponentially increasing the value of those options (which give them the right to buy stocks at a fixed price).

The do-it-yourself traders of r/WSB are waging a kind of guerrilla warfare in the markets, trying to exploit what they see as weaknesses in the system to move prices where they want them. For anyone who wondered about where the small day traders who made the 1990s so wild went, meet the 2020 version. After years of indifference, individual investors seem to be finding their way back to stocks, for better or worse. They’re flexing muscles in ways that can easily call to mind excesses from the dot-com era.

Many Trump administration policies are aimed at restricting immigration. But at a private event in Britain last week, the acting White House chief of staff, Mick Mulvaney, said that immigrants were key to America’s future growth, according to the NYT’s Jeanna Smialek and Zolan Kanno-Youngs.

“We are desperate, desperate for more people,” Mr. Mulvaney told a crowd, according to an audio recording given to The NYT. “We are running out of people to fuel the economic growth,” he added — though he said he wanted more immigrants only in a “legal” fashion.

Although President Trump has described the country as “full,” slow population growth in the native-born U.S. work force means immigration will be needed to propel the economy. Immigrants accounted for about half of the labor force’s expansion over the past two decades.

In an interview with NBC’s new Byers Market podcast, Sheryl Sandberg of Facebook outlined the tech giant’s plan to defend itself against rising public skepticism and political inquiries.

• “There is growing concern, which is based on a lack of understanding, that we are using people’s information in a bad way — we are selling it, we are giving it away, we are violating it. None of that’s true. We do not sell data.”

• “Here’s what we do: We take your information and we show you personalized ads,” she said, in order to give users “a much better experience.”

OK, but … “I’m going to give a big speech next month,” Ms. Sandberg said. “And I’m working on an op-ed. We need to go out and explain the business model clearly.”

• The Carlyle Group doesn’t plan to raise a separate impact investing fund. Instead, it plans to make adopt the approach across its entire portfolio. (Bloomberg)

• Senator Pat Toomey, Republican of Pennsylvania, changed his mind and says he will back Judy Shelton’s nomination to the Fed board. (NYT)

• Facebook and Instagram are rethinking their brand sponsorship policies in the wake of enormous spending by Mike Bloomberg’s presidential campaign on undisclosed political ads. (NYT)

• Britain and the E.U. are preparing for a fight over post-Brexit trade policy. (Bloomberg)

• Clearview AI, the facial-recognition software start-up that has alarmed privacy watchdogs, said its entire client list had been stolen in a hack. (Daily Beast)

• Banks are forgoing $2 billion in annual revenue by not ensuring that black Americans have the same access to financial products as white Americans. (McKinsey)

• The key events that led to the explosion in popularity of Japanese whiskey in the U.S. (Quartz)