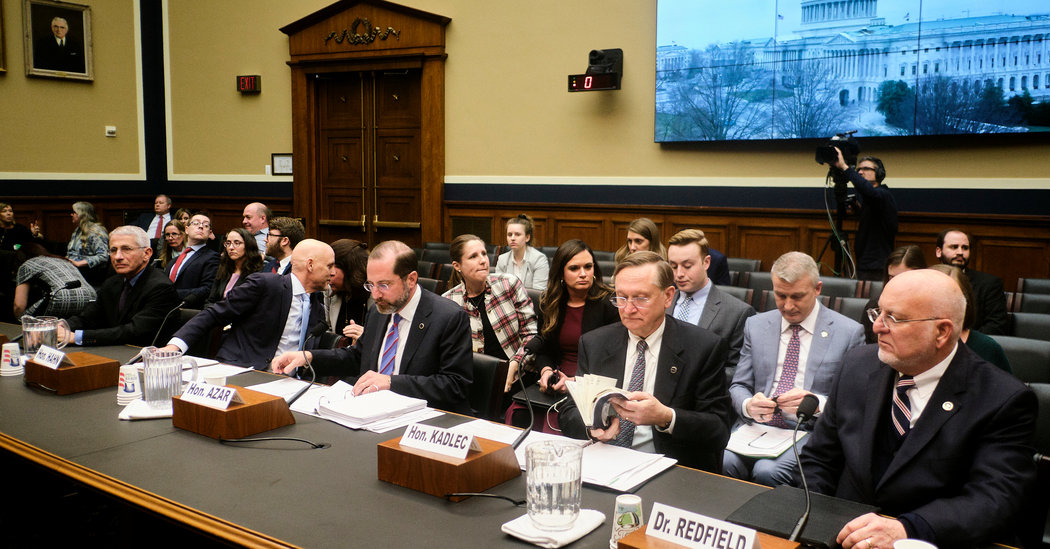 President Trump formed a coronavirus task force in late January, and members have been meeting regularly. But as the virus began to spread around the globe and infections were confirmed in the United States, Mr. Trump named Vice President Mike Pence as his point person at the end of February, and more administration officials were added to the panel. Among them are internationally known AIDS experts; a former drug executive; infectious disease doctors; and the former attorney general of Virginia.

An experienced scientist and physician, Dr. Birx will report to Vice President Pence, though White House officials did not specify how her duties will differ from those of Mr. Pence or Alex M. Azar II, the secretary of health and human services who is the chairman of the nation’s coronavirus task force.

Nominated by President Obama in 2014 to the State post, Dr. Birx has spent more than three decades working on HIV/AIDS immunology, vaccine research and global health. For the past six years, Dr. Birx, a former Army colonel, has been in charge of the President’s Emergency Plan for AIDS Relief and America’s participation in the Global Fund to Fight AIDS, Tuberculosis and Malaria. From 2005 to 2014, she also was director of the division for Global HIV/AIDS at the Centers for Disease Control and Prevention.

A biography distributed by the White House said she had “developed and patented vaccines, including leading one of the most influential HIV vaccine trials in history.”

During her confirmation hearing in 2014, Dr. Birx spoke with admiration of the government’s ability to come together to confront a deadly disease that threatened the health and welfare of people around the globe.

“The history of the end of the 20th century will be forever recorded with the emergence of a new and deadly viral plague that challenged us scientifically, socially and politically,” she told members of the Senate Foreign Relations Committee. “Fortunately, that history will also record that — eventually — we faced our own fears of the disease and embraced those infected and affected with the open arms of compassion, creative research and determined solutions.”

Alex M. Azar II became secretary of health and human services in January 2018, arriving with a background in government and industry and presenting himself as a problem-solving pragmatist.

He replaced Mr. Trump’s initial pick for the job, Tom Price, who had resigned in September 2017 in the face of multiple federal inquiries into his use of private and government planes for travel.

Mr. Azar, a former top executive at Eli Lilly, has navigated a series of high-profile issues since taking the job, from attempting to scale back the Affordable Care Act to overseeing the shelters that have housed the thousands of unaccompanied minors separated from their parents during border crossings or who entered the United States alone. He has also sought to address rising drug prices and public health initiatives such as improving the care of people with chronic kidney disease, although many of those policies have not come to fruition.

And he has clashed with top health officials, including with Seema Verma, the administrator of the Centers for Medicare and Medicaid Services, in a power struggle that required the intervention of the White House.

From 2012 to early 2017, Mr. Azar was president of Lilly USA, a unit of Eli Lilly and Company, a major producer of insulin. That history as a drug company executive came under criticism during his Senate confirmation, when Democrats questioned whether he would take the industry’s side on the issue of rising drug prices. Republicans cited that experience as an asset, arguing that it would help him better understand the problems.

Mr. Azar, 52, was a law clerk for Supreme Court Justice Antonin Scalia. He joined the administration of President George W. Bush as general counsel of H.H.S. in 2001 and became deputy secretary four years later. While there, he helped carry out a 2003 law that added a prescription drug benefit to Medicare, one of the most significant changes in the history of the program.

Mr. Azar graduated from Yale Law School and grew up in Maryland, where his father was an ophthalmologist and his mother a registered nurse.

A longtime AIDS researcher, Dr. Robert R. Redfield has served since March 2018 as the director of the Centers for Disease Control and Prevention and administrator of the Agency for Toxic Substances and Disease Registry.

As such, he is the nation’s chief public health officer, overseeing government response to crises like the opioid epidemic or Ebola, and has had primary responsibility for supervising the federal response to the coronavirus cases in the United States, reporting to Mr. Azar.

Dr. Redfield has already been the target of criticism for some of the C.D.C.’s decisions — including testing protocols that may have missed infections, flawed testing kits for the virus and the repatriation of infected patients from the Diamond Princess cruise ship — although it is not clear whether his was the final word on these and related actions.

Before taking his post, Dr. Redfield was a professor at the University of Maryland School of Medicine, where he co-founded the Institute of Human Virology, and served as chief of infectious diseases. The institute provided treatment for H.I.V., the human immunodeficiency virus, to more than 6,000 patients in the Baltimore-Washington area and more than 1 million people in Africa and the Caribbean. Earlier in his research career, Dr. Redfield advocated broad testing for H.I.V. and the screening of military personnel for the virus — and faced renewed criticism for those views when he was nominated to the C.D.C. post.

A native of Chicago, Dr. Redfield grew up in Bethesda, Md., where both of his parents worked at the National Institutes of Health. He graduated from Georgetown University and its School of Medicine, and did his residency at Walter Reed Army Medical Center, then continued as a researcher there, focusing on AIDS. He launched the virology institute with Dr. Robert C. Gallo, who developed the blood test for H.I.V. in 1996.

As head of the National Institute of Allergy and Infectious Diseases at the National Institutes of Health since 1984, Dr. Anthony S. Fauci has played a central role in research of disease outbreaks, and the search for cures, since the emergence of HIV/AIDs — as he is doing now with the coronavirus.

He testifies regularly to Congress about the threat of emerging diseases and has been one of the most prominent leaders of the government’s front line on public health.

Behind the scenes, though, is where Dr. Fauci is considered most influential: He helps shape the decisions about where research should be directed in search of a response or cure. Overall, Dr. Fauci oversees an agency with a budget of $5.9 billion for 2020.

Dr. Fauci grew up in Brooklyn. His father was a pharmacist. attended Holy Cross College and was graduated from Cornell University Medical College in 1966. His life shifted significantly in 1981, when he was working at the N.I.H. and gay men began showing up with devastated immune systems.

Dr. Fauci, while certainly not known in popular culture circles, carries a kind of celebrity status among scientists. That might stem in part from the amount of research money he controls but also because of his ease with communicating deep science both with nuance and accessibility, making him a translator of sorts during times of crisis.

Kenneth T. Cuccinelli II, one of the top immigration officials in the United States, has brought his firebrand approach to Mr. Trump’s coronavirus task force.

He leads the United States Citizenship and Immigration Services, the agency overseeing legal immigration, while simultaneously working as acting deputy secretary of the Department of Homeland Security. In nine months, the former attorney general of Virginia has gone from defending Mr. Trump’s aggressive immigration policies on Fox News to representing the Homeland Security Department on virus response.

Mr. Cuccinelli coordinates the screening of travelers at airports, and land and maritime ports, and has overseen the monitoring of people who have recently traveled to China or shown signs of illness.

In his short time with the Homeland Security department, Mr. Cuccinelli has irked other agency leaders with his aggressive communication to the public — including when he said the sonnet on the Statue of Liberty poem referred to “people coming from Europe.”

Mr. Cuccinelli was similarly criticized on Monday afternoon when he complained on Twitter that he could not gain access to a Johns Hopkins University map of the spreading coronavirus outbreak.

“I’m sure it’s jarring to the public to see a very high ranking federal official sending out an S.O.S. on Twitter,” said January Contreras, who was a senior adviser to Janet Napolitano, his predecessor at the homeland security agency.

After Senator Chuck Schumer, the Democratic leader from New York, said Mr. Cuccinelli’s appointment to the task force showed how “hollowed out” federal agencies are, Mr. Cuccinelli pointed the finger at Mr. Schumer for not attending a briefing on the virus.

In an interview with The New York Times earlier this month, Mr. Cuccinelli said he spent much of his time since being appointed to the task force calling hundreds of local politicians to coordinate their responses to the virus.

Born in Edison, N.J., Mr. Cuccinelli was raised in Virginia. He graduated from the University of Virginia with an engineering degree and from George Mason University with a law degree.