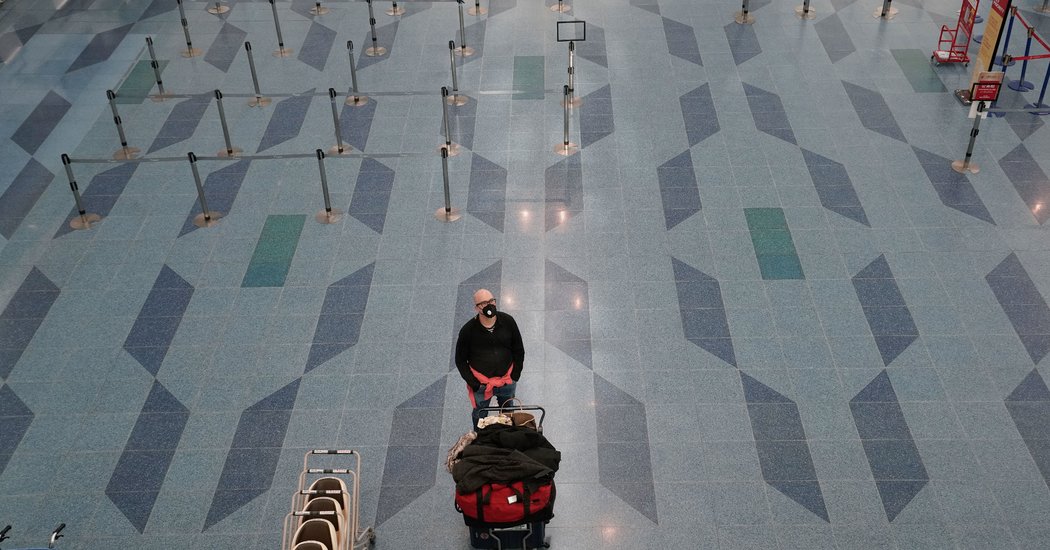 Often, when the economy runs into trouble, it goes through a slow glide from good times to bad. Other times, it is more like a fast car slamming on the brakes.

A potential coronavirus recession looks more and more like the second situation — and that has big implications for how painful a downturn would probably feel.

February employment numbers released Friday morning made clear the strong pre-virus state of the economy. They showed an economy performing at a high level as recently as three weeks ago, the period covered by the survey on which those numbers are based.

This implies that if the outbreak of a novel form of coronavirus spurs a recession, it will look quite different from some previous downturns. In the last two such episodes, there was a prolonged period when imbalances in the economy were correcting themselves before economic pain really started to bite.

There is no recent U.S. parallel to going from our February condition — a remarkably low 3.5 percent unemployment rate, a robust 273,000 jobs added — to outright contraction within two or three months. But that is increasingly what financial markets and forecasters view as a serious risk.

It explains why the Federal Reserve enacted a surprise interest rate cut this week, despite no meaningful evidence in economic data of a slowdown. It is why yields on longer-term bonds have abruptly fallen to the lowest levels in history. (This implies that investors who were relatively optimistic at the start of the year now see a prolonged period of weak growth and very low inflation.)

There is some positive news. The healthy pre-coronavirus state of the economy implies that there are no huge imbalances that the United States needs to work through to get to the other side, equivalent to the stock market bubble of 2000 or housing bubble of 2006. That opens the possibility for a rapid return to economic health once the virus is contained.

The bad news is that it will make this downturn feel all the more abrupt, and leave individuals and companies less time to make adjustments in preparation.

“Because it’s happening so quickly, we could get more of a shock factor,” said Michelle Meyer, head of U.S. economics at BofA Securities. “The speed of the shock is important and could result in a downturn feeding on itself more acutely.”

Suppose you run a business in travel and tourism. As of mid-February, you were looking forward to a strong year. You might have hired and made capital investments accordingly, and willingly borrowed money to do so.

Now, with many people afraid to travel, that business might face a shortfall in revenue and the prospect of more severe layoffs, budget cuts and even debt defaults than it would have if the warning signs had been building for longer.

Similarly, an American who was feeling confident about her job and enjoying a record-high stock market in mid-February might have made financial decisions premised on the continuation of good times — being willing to make big-ticket purchases, for example — that could leave her more vulnerable if she were furloughed or laid off because of business shutdowns.

The abruptness in the change of outlook, in that sense, increases the odds that the coronavirus shock could ripple through other corners of the financial system and broader economy.

For example, if the hypothetical travel company defaults on its debts, or the hypothetical individual falls behind on credit card payments, that could help fuel a pullback in all types of lending across the economy. A tightening of credit could in turn slow economic activity even among businesses and consumers not directly affected by the virus.

It’s not just travel. The price of oil has fallen by 33 percent in the last two months, including a drop of about 8 percent on Friday. There are likely to be oil producers carrying debt that was perfectly manageable when a barrel of West Texas Intermediate crude was $63 a barrel in early January, but that will be suspending production and at risk of bankruptcy when it’s $42 a barrel.

These sorts of ripples are hard to predict, but they are what economists are increasingly starting to fear — and are priced into the absurdly low longer-term interest rates evident in the bond market.

“If you look at the violent moves we’ve seen in markets, it doesn’t look like we’re heading for a slow, gradual slowdown,” said Lydia Boussour, senior U.S. economist at Oxford Economics. “It’s a very pervasive risk, it’s evolving fast, and it’s not just a one-off shock. It’s at risk of propagating throughout the economy.”

The question for the economy in 2020 and beyond is whether coronavirus’s economic impact can really be walled off from the rest of the economy and financial system, resulting in a painful but short interlude.

The shorter the impact, the easier it will be for the economy to go back to its (quite good) pre-virus functioning. Maybe the travel companies and oil companies and furloughed individuals will be back on their feet quickly enough that the damage doesn’t spread widely.

The alternative is that it sets off economic ripples that will affect the world for a long time to come.

If there is nothing fundamentally wrong with how the economy is structured, after all, a return to the status quo should be perfectly plausible.

But as every driver knows, coming to a sudden stop is stressful and painful, and can do a lot of damage that a gradual slowdown wouldn’t.